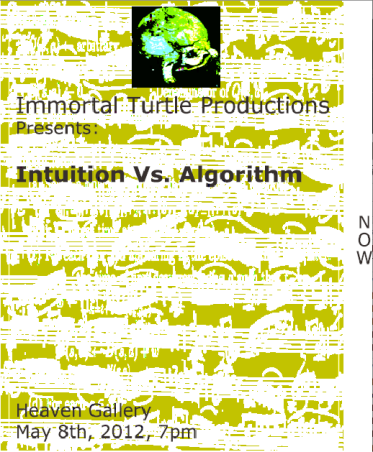 When I accepted the assignment to make a piece for this show, I was quite thrilled by the push and pull duality inherent in the phrase “Intuition/Algorithm”. After all, intuition is the deepest, rawest instinct of the human mind and we think of algorithms, when we think of them all, as the refined product of the right brained, never to be grasped easily except as part of an advanced degree. Except… we mention the latest algorithms so casually, designers wrapping them in friendly GUI to hide the bitterness of math, and make them sweet like music. They hide it when we ask our friends to “Google it” or in the marvel of a newborn learning to use his parent’s iPad, the trajectory of an angry bird. Design is increasingly the art of masking algorithm in intuition.

If the concept of the program was exciting, I was not so thrilled by Sarah’s request that I select a contemporary artist who exemplified this concept and write about them. Which is why I’m giving a speech: I dragged my heels so long that I didn’t get it printed in the program. Oops! Sorry. The difficulty wasn’t in selecting an artist. I very quickly decided that I wanted to speak about Jenny Holzer. For me, she exemplifies the theme of our show. Hers is work that can only exist in this digital era of signboard and computer typography and projection yet speaks with a loud clear voice about things we know to be true but are afraid to admit to ourselves, let alone one another. Intuition. Algorithm.

The trouble that I faced was in selecting a single piece by Holzer to discuss. Her entire body of work centers on these ideas, but I finally had to choose and I chose  “Installation for Neue Nationalgallerie” in Berlin. This marriage of art, technology and architecture was debuted in 2001 and consists of thirteen scrolling LED tickertape displays in amber installed upon exposed beams in the roof of the building. The text of the piece was written by Holzer herself, and describes a mother as she observes the changing body of her adolescent daughter.

“THOSE RIBS ARE TOO LIGHT TO KEEP YOU. THAT TORSO IS BUILT NARROWLY OF SHARK CARTILAGE OR SHOE PLASTIC. SLIGHTNESS MAY COME FROM YOUTH OR BY DESIGN.”

“I FORGET YOUR HANDS WHEN I MOVE AWAY. IT IS INDECENT TO RECOGNIZE MY FAMILY AND WHAT IT DID IN A PALM OR FINGERNAILS. I WANT YOU FRESHLY MADE.”

The words scroll on and on across the ceiling in a never ending loop from adulthood to the decision to keep a child, without end. The hard, unforgiving orange light industrializes a text that memorializes the sentiments of motherhood.

The Photo-Programitism* of Laszlo Moholy-Nagy

I have selected, not one piece of art, but selections from the body of work of Laszlo Moholy-Nagy who’s experimentation with light as a medium used directly for the purpose image sets a visual precedent for the abstract machine inspired aesthetic and whose process is greatly aligned with the working methodology of musique-concrete and electronic sound manipulation.  While no concrete algorithms are used in the process of his work per-se, the dependence on the technology at his disposal does necessitate the mindset and approach to art-making that one is beholden to when confronted with the technological programs and limitations of electronic and mechanical media.  The photograms, collages, and photographs of Nagy when observed as a whole present the astute observer with a unique personalized aesthetic that goes beyond what was achievable by way of conventional plastic media used by other more notable artists who aligned themselves with cubism and constructivism.   By infusing, at the onset of creation, a purely intuitive placement of objects to be not represented, but rather RE-presented as mysterious entities whose embedded alien aesthetic is revealed through the impersonal photographic process, Nagy has created the first true synthesis of man/machine collaboration which has left on enduring legacy on the discipline of technological art.

*Photo-Programmitism: is a term that I invented for the purpose of talking about Nagy’s work in particular since his creative output was not limited to photography, but was rather beholden to an aesthetic that necessitated multiple approaches to image-making where the process of creation is depenedent on the use of light as a medium.